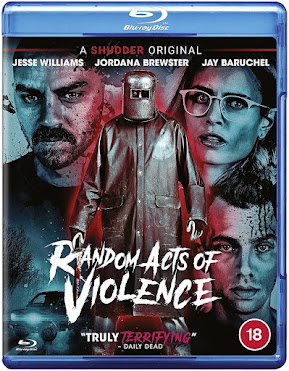 “Nobody ever talks about the victims, and those are the people who matter!”

It’s a pertinent point, one which put me in mind of Hallie Rubenhold’s The Five, the book in which the writer cast a spotlight on Jack The Ripper’s victims and effectively challenged the tendency of the true crime genre to focus its energies on the mindset of the killer and treat the victims as less important, passing two-dimensional characters.

It’s perhaps the conflict between a voracious public appetite for serial killer stories and the comparative lack of interest in the detailed backgrounds of their victims that underpins Random Acts Of Violence, where the above point is raised by Kathy (Brewster): She’s working on a serious study of a series of killings which (in this film’s universe) took place on a stretch of Interstate-90 from 1989 to 1992. Her husband, Todd (Williams) has taken a very different inspiration from the same events, for the perpetrator of those crimes is represented as anti-hero Slasherman, the star of Todd’s long-running comic book series.

The pair have been travelling along that same stretch of highway to attend a comic-con where Todd is doing the usual meet-and-greet duties for a queue of adoring fans, and the two have been joined by Todd’s friend Ezra (Baruchel) and assistant Aurora (Wilson). When the travelling party pulls into a ramshackle gas station en route, Ezra thinks it might be a wheeze to restock the store’s depleted magazine rotunda with some of Todd’s back-issues of Slasherman.

A later customer browses the impromptu comic display and takes a particular interest in the Slasherman volumes, and when Todd is being interviewed for a radio phone-in, a cryptic call (claiming to be from someone sharing the name of one of the killer’s earlier victims) gives the coded message: “1, 12, 18”.

It heralds the beginning of a new series of murders on I-90, which mimic scenes from some of the more grisly comic panels. The mimicry is pulled into sharp focus when the travellers get a close-up glimpse of the aftermath of a group slaying, and the killings gradually get closer to home.

As Todd faces accusations that his fictional killings might be inspiring real-life acts of violence, there are times when one wonders whether Random Acts Of Violence concurs with that viewpoint and is effectively biting the hand that feeds it: Fans of horror comics, or horror movies for that matter might occasionally feel like the script is having a go at them.

Still, I would argue that the ultimate revelation of the real reason why the killings have resumed not only subverts that notion but casts a very different light on Todd’s motivations for creating the comics in the first place, and it still seems fair game to point at the more unnerving end of fandom when a fan proudly shows off his hand-crafted model of Slasherman’s truck, complete with a very carefully detailed, miniature torture victim tied up in the trailer – after all, haven’t we all encountered that fan who takes it just that bit too far?

The moral viewpoint may shift throughout the film, but perhaps that’s the point. With its admirable subversion and challenging of slasher tropes, and some genuinely unsettling and tense moments Random Acts Of Violence is the kind of film that starts a conversation once the credits roll, and it's a conversation worth having.

Random Acts Of Violence is out on blu-ray in the UK from Acorn Media on August 23rd 2021.