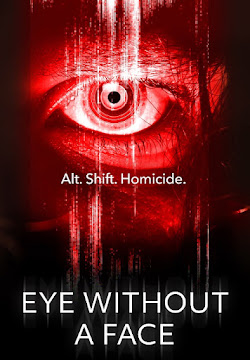 Eye Without A Face

Henry (Shapiro) lives a mostly solitary life, indulging in the dubious practice of monitoring several local ladies whose webcams he has hacked into. Henry holds one-way conversations with them as though they are close acquaintances but the only meaningful in-person interaction he has is with his lodger, out of work actor Eric (Cook) who imagines that he can trade off his lack of rent by offering Henry friendship of sorts.

The girls that Henry watches over are a disparate group: there’s online influencer Ella (Marie), musician-in-a destructive-relationship Sky (Neuhart) and Tessa (Rogers), a webcam model who argues on the phone with her mother about her chosen profession.

Their day-to-day lives are overshadowed for Henry by that of Laura (Verevko), who seems to have a string of short-lived boyfriends in the truest sense of the term, since they are seen being taken upstairs but never seen leaving. Putting the available evidence together in his head, Henry is convinced that he is watching a serial killer at work, a notion only confounded when he sees her dragging what appears to be a corpse-packed bin bag across the living room.

Questions are raised as the film progresses: Is Henry putting two and two together but coming up with five? Does he have his own demons to deal with? Is there more than one killer at large?

Eric takes drastic steps to convince Henry that the whole thing is a flight of fancy, fuelled by his insular and obsessive pastime and even goes so far as to bring him face-to-face with one of his online coterie but, as things reach a head it’s clear that (for a few characters at least) this spiralling situation is not going to end well…

The script aims at ambiguity over who is perpetrating what but ends up becoming somewhat muddled, and the contrasting elements of voyeuristic horror, slasher mayhem and what verges on buddy-com banter between Henry and Eric never quite manage to reconcile. Still, for all that Eye Without A Face is still a worthy attempt to shake up some familiar ingredients: Rear Window (1954) is an obvious reference, and there is also a climactic moment which is akin to an up-to-date take on Peeping Tom (1959).

Also on the plus side, the presentation is striking with a top notch lead performance from Dakota Shapiro, sparking memories of Elijah Wood’s turn in the Maniac redux (2012). Even if it doesn’t quite manage to coalesce its parts into a truly satisfying whole, Eye Without A Face has more than enough going for it to merit your investigation.