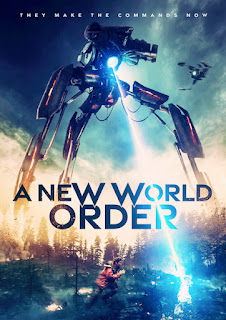 A New World Order (aka A Living Dog)

An unspecified date in the future: Tomasz (Ebel) is part of a troop fighting a legion of mechanical creatures, the A-Mech Mark 8. Created by the Igacho Corporation for the apparent benefit of humankind, these intelligent creatures have turned their attentions to wiping out the entire population and taking over.

When the soldier next to him meets a nasty end at the hands of the enemy (who are clearly winning this war), Tomasz decides to take the survival option, flees in a VW van and holes up in a remote, abandoned house in the heart of a vast forest.

It turns out that the house isn’t as abandoned as it looks: Out inspecting a malfunction in his portable forcefield (now there’s a handy gadget), Tomasz gets a full-on whack around the mush from some heavy-duty kit wielded by Lilja (Hase), who is holed up in the woods obsessively tinkering with parts from disassembled A-Mechs when a bound and gagged Tomasz eventually comes around.

Lilja is Russian, but it’s just as well that the two don’t speak the same language for the A-Mechs pick up on their prey by detecting the sound of their voices. Without the benefit of verbal communication, Tomasz faces the difficult task of demonstrating to a clearly suspicious Lilja that he is not a threat to her, whilst working out how to evade and survive the threat from the A-Mechs.

Meanwhile, Lilja has a bigger plan in mind…

Originally going by the less prosaic (if possibly more intriguing) title of A Living Dog, the renamed A New World Order comes to UK screens two years after it debuted on the festival circuit. It’s by no means the only film to have its distribution disrupted by global events beyond its control, but I would say this one has been well worth waiting for.

The creatures are like a more angular cross between the fighting machines of Jeff Wayne’s musical version of War Of The Worlds (1978) and the BBC’s take on John Christopher's The Tripods (1984-85), and they are very impressive on the screen, especially when one considers that A New World Order is a very small independent production, initially supported through a Kickstarter campaign.

Ebel and Nase do fantastic work in the leads, entirely mute save for one repeated line each – you can totally believe the difficulties with expressing and explaining themselves to each other, and the two get enough of the anguish from their characters’ back-stories across to make for some truly poignant moments without bogging down the film in unnecessary diversions.

This is demonstrated no better than when we learn that Lilja has suffered a deep personal loss in this war – the bare details we have are enough for us to feel for her. No further explanation is needed. Likewise, a brief flashback to a terrible act by Tomasz as he flees the warzone is enough to make us think a bit more about our view of him.

Ultimately a tale of (to a certain extent) tragedy and (to a larger degree) redemption, Daniel Raboldt’s film is a textbook exercise in getting one hell of a lot out of very little. It’s tempting to wonder what he could pull off with bigger resources, but the sheer economy of scale works so well in the favour of A New World Order that my selfish side wants to see what else he could pull off with similar restraints.

In a nutshell, A New World Order is an effective little gem.

A New World Order is out on UK digital platforms from Reel 2 Reel Films on August 23rd 2021.

FOOTNOTE: Just a point to consider for anyone thinking “Enemy creatures picking up the sound of the human voice? A Quiet Place did that already!” – Work on this film began in 2016, a full two years before A Quiet Place was released.