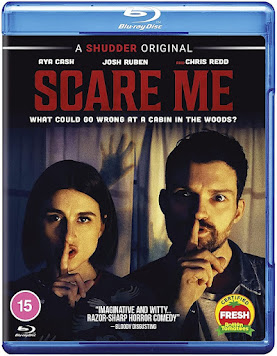 When writer Fred (Ruben) checks in to a remote cabin in an attempt to break his writer’s block, he meets another writer, Fanny (Cash) who is staying nearby. When a power cut hits the area on a stormy night, Fanny drops-in and the two decide to pass the hours by regaling each other with scary stories…

So far, it’s the ideal set-up for a horror anthology picture, but Scare Me has a nice twist up its sleeve: Where one would expect the scene to cut away elsewhere for a cast of players to unwind each tale, the action instead unfolds within the cabin as Fred and Fanny act out their tales, at first individually but the process becomes an increasingly collaborative one as the film progresses.

There’s an interesting undercurrent to the interplay between the two: Fanny is already a success with a bestseller under her belt, while Fred is struggling to reach first base with his premiere effort and it’s interesting that Ruben has made his feature debut as writer/director by casting himself as someone who clearly can’t put his ideas across successfully: Fanny can’t help herself in correcting his grammar, pointing out his plot holes and interjecting with her own improvements.

A break between tales reveals a message on Fred’s phone that indicates a personal life in disarray, making his attempt at an artistic breakthrough all the more desperate. Any potential tension from that revelation is temporarily dispersed by the arrival of a much needed pizza, delivered by Carlo (Redd), a horror-fan who is awe-struck by the revelation that Fanny is the author of his favourite book.

Carlo joins in for a stimulant-fuelled run-through of Fanny’s novel but, with his eventual departure to continue his rounds the chasm between Fred and Fanny’s respective lives and achievements becomes all too clear and the storytelling takes a darker turn as dawn approaches…

Ruben and Cash bounce off each other brilliantly – indeed, the cast dive into things with aplomb and there’s the feeling (in a good way, I assure you) that there was a fair bit of spontaneous wordplay flying around this set.

Scare Me perhaps carries on too long for its own good (dare I say most of the pizza-delivery-guy section disrupts the flow and could have been dropped?), the disjointed nature makes for an uneven ride and the final gear shift into more chilling territory doesn’t quite have the impact it should, but that’s not to say that the denouement isn’t a satisfactory one by any means.

Genre fans will enjoy the references to various touchstones (Poltergeist, Halloween, Jaws and many more are namechecked) and regardless of any reservations noted above, for its refreshing take on the horror anthology idiom Scare Me is a fascinating feature debut well worth seeing – I’m certainly intrigued enough to seek out Ruben’s filmic take on video game Werewolves Within (2021).