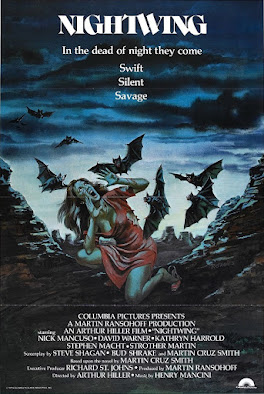 Tribal elder Tasupi (Clutesi) launches his own offensive against the plans by unleashing dark forces in the form of vampire bats, and horses and livestock are attacked. Meanwhile, Duran’s doctor girlfriend Anne (Harrold) has headed out into the desert with a tourist party which soon comes under siege from the winged menace, and it seems that biologist Phillip Payne (Warner) may be the only person with the know-how to get rid of it…

From the director of Love Story (I kid you not) came this quite puzzling bats-on-the-attack feature, another 70’s entry in the animals-gone-wild cycle (see Jaws, Grizzly, Piranha et al) which starts out with an intriguing premise and some lofty ambitions to spotlight the concerns of Native Americans, then blows it all by casting a Canadian-Italian and a Philadelphian of Russian descent in the leading roles – Hollywood was apparently still no more comfortable in employing indigenous tribespeople in starring roles than it was when German-born Henry Brandon was cast as Chief Scar in The Searchers (1956).

That aside, Nightwing is strangely lacking in any real tension or menace and there are some utterly baffling editing decisions on display. Some scenes seem to haphazardly jump to the next without reaching any kind of climax and the script’s socio-political points feel like they’ve been shoehorned in from a checklist.

Then there are the actual attack sequences… The appalling matte work is one thing (you could be forgiven for thinking Bert I. Gordon had been involved), but the bats themselves are ridiculous, like Halloween toys on sticks. It’s a shock to see that they’re the work of Carlo Rimbaldi (Alien, E.T.,King Kong) and one can only wonder what went wrong in their execution.

At least the audience can depend on David Warner: An actor who could always be relied upon to put in a decent shift, his fanatical bat hunter is by far the most interesting thing in the film, since the remaining characters (with the exception of a brief turn from Barnard Hughes as the local storekeeper) are as dull as the bat attacks are risible.

For all that, Nightwing still has some curiosity value as a historically interesting, albeit clumsy attempt to bring some social consciousness to the form of the creature feature. It’s beautifully shot by Charles Rosher and there’s even a score from Henry Mancini which would have no doubt aided the atmosphere of a better film – it’s wasted here, and it’s somewhat bewildering that such a prestigious team ended up creating something so middling.