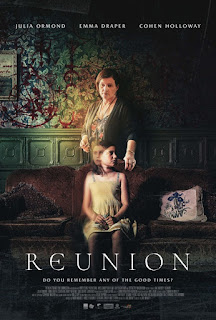 Ellie (Draper), pregnant and apparently fleeing an abusive relationship returns to the home of her recently deceased grandparents where her estranged mother Ivy (Ormond) is boxing up belongings in preparation for a house sale.

It seems that a reconciliation between the two might be possible, but there are unresolved matters from the past: The death of a half-sister in the house still hangs heavy in the air, and as the details seem to become clearer to Ellie in increasingly nightmarish flashbacks an even darker family secret reveals itself…

Those in search of a cut-and-thrust horror ride can look away now, for Reunion is a slow burn indeed, driven for the most part by an intense two-hander between Ormond and Draper (who both acquit themselves admirably), gradually revealing the layers of a troubled mother/daughter relationship. Meanwhile, Ellie’s memories of past traumas are slowly revealed through a series of partly repetitive, partly contradictory flashbacks, perhaps fuelled by Ellie’s withdrawal from possibly emotion-numbing medication.

Ellie and Ivy’s uneasy interaction is interrupted only by Ellie’s incapacitated father Jack (Bach) and local architect (and Ellie’s old flame) Gus (Holloway) who has been hired to spruce the place up before it’s sold on. The stroke-ravaged Jack may initially draw the viewer’s sympathy for his current situation, but as his past misdemeanours are steadily divulged one can’t help feeling that he’s gotten no less than he deserves.

The most prominent character of all in Reunion may be the house itself, its faded grandeur captured with fantastic camera work (by Adam Luxton) which imbues this seemingly benign structure with a malevolent personality of its own, one which signposts the skeletons hanging in the collective family closet. The air of melancholy manifests itself in the most literal fashion as black bile, be it on Ellie’s person or from the house’s ageing water pipes.

The pacing won’t be to everyone’s taste, indeed this is one of those films which will likely divide opinion right down the middle but those in the right frame of mind will be rewarded with a big climactic gear change into a conclusion which paradoxically manages to be both revelatory and ambiguous: Ellie, after all has demonstrated herself to be an unreliable witness throughout the film and the viewer’s search for the real facts leaves Reunion lingering in the mind and inviting a second look.