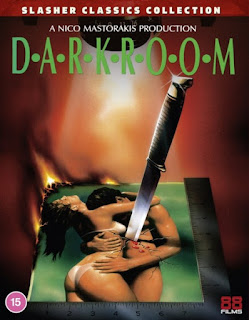 After committing a brutal double axe murder, an unknown assailant targets a large family in a remote house. Tensions rise as it becomes apparent that the killer may be someone close to them, looking for revenge after they traumatically saw two family members indulging in lewd behaviour as a child...

Here's one I last saw on a VHS from Guild Home Video (remember them?) and had forgotten all about until a recent Bluray release. It all starts off promisingly with some creative titles which display the credits on the ephemera of a photo lab (negatives, photo paper and the like) before heading into an opening killing which indicates we might be in for a giallo-esqe hour and a half.

Unfortunately, Darkroom is promising more than it delivers and things drop off rapidly from there. The following half hour or so is a bit of a chore to sit through before things do admittedly pick up, but for a slasher flick we don't see much actual slashing going on.

Manwhile, Darkroom's murder-mystery elements fall flat through some all too obvious red herrings and dialogue which really should have been through another script revision before the cameras rolled - the obligatory-for-the-late-80's nude/scantily-clad shots do little to keep the audience's attention.

Still worth a look as one of the more forgotten entries from producer Nico Mastorakis' filmography - I'm sure some of the settings (i.e. the orange groves) look very familiar from his more impressive production of the previous year, Grandmother's House. Also, the final humility heaped on the killer in the closing moments is a nice ironic touch - it's a pity it wasn't utilised in a stronger film.