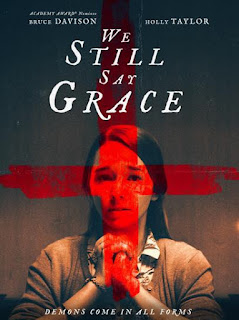 When three students on a road trip get a flat tyre in the middle of nowhere, they call in at a farm looking for help. It’s the home of Harold (Davison), a religious zealot who rules his family with a rod of iron and has a take on Christianity which is unorthodox to say the least.

Unbeknownst to the three, Harold has been doing a dry run for a suicide pact between himself, wife Betty (Zucker) and daughters Maggie and Sarah (Taylor and Volk respectively). Maggie, however seems somewhat resistant to this plan and the visitors  offer a window to a different world…

There’s a nice wrong-footing of the audience early on, as the opening scenes give the impression of a frontier family in the old west before a white Cadillac appears and the stark contrast between the residents and visitors becomes apparent.

It’s not long before Harold is revealed to be a hypocrite, and an unsound one at that. Just how dangerous he is becomes clearer as Maggie, somewhat liberated by her contact with the outsiders begins to question and challenge her way of life.

The “stranded travellers find themselves taken in by fundamentalist nutter” strand is a well worn one, but the script by directors Helmink and Rauschelbach throws some interesting curveballs during its 94-minutes and the pair do a good job of keeping the spiralling situation just the right side of going off-piste.

There are strong turns all-round from the cast, particularly the female performers making up Harold’s family but it’s Bruce Davison (always a great asset to any production) who provides the perfect vehicle for them to bounce off with a performance which is alternately disturbing and infuriating, such does he get under the skin of this repellent individual. His interaction with Holly Taylor in the latter part of the film, where the two mentally square-off against each other raises We Still Say Grace a very large notch above the usual religious-fanatic chiller.

We Still Say Grace is released to UK digital platforms by 101 Films on May 3rd 2020.