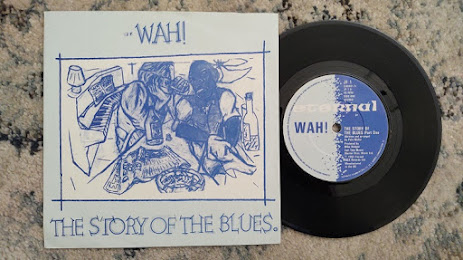 It’s the dying days of 1982, just after Christmas. I’m sitting in a lorry at Stansted Airport. It’s freezing, the fog refuses to budge.

Grandad’s sitting behind the wheel, reading the paper. We’re waiting for a delivery from Portugal to be loaded onto a trailer for us to take back to Southampton. The beans on toast we had at a transport café a couple of hours back are an increasingly distant memory. We could both kill for a cup of tea to warm up.

Grandad starts up the engine of the DAF cab to get the heater working. No thought given to releasing unnecessary diesel fumes then. Nobody bothers about it.

Mike Read’s doing the breakfast show on Radio 1. Grandad would probably prefer to have Radio 2 on, but he tolerates my choice when I come along for the ride.

Mike’s having a bit of banter with the newsreader about how to pronounce the name of the band whose new single he’s about to play. Is it Waaaaarrrrr? Waaaahhhh?

Anyway, they’re called “Wah!”, previously “Wah! Heat”, “Shambeko! Say Wah!”, and later to be “The Mighty Wah!”, “Wah! The Mongrel”… but I don’t know anything about that right now. It’s a band I haven’t heard of, and this is their new single.

Mike thankfully cuts off the repartee and finally plays the record. It’s called The Story Of The Blues (Part 1). And it’s bloody marvellous.

That rollicking drum rhythm. Those strings. Instant attention grabber. Then, as the backing singers do a quick “Ooooo…” Pete Wylie’s voice comes in.

I’m only nine, heading for ten so I have no idea what the words are about. Is he talking about a book called The Story Of The Blues? Is it one of those partworks you collect every fortnight?

I don’t even remotely twig that the words are all about life kicking someone down one too many times, about being made to feel useless and worthless but with a glimmer of optimism in there. I’ve not gotten far enough through life to get it.

None of that matters right now. All I hear is that brilliant noise, pulling back a bit in the verses, going full throttle again on the choruses then pulling out all the stops for the final repeat, Wylie adding an extra counterpoint vocal to tip it right over the emotional edge. This thing sounds amazing, fighting through the medium wave static.

And then it fades. It’s gone, become a what-the-hell-did-I-just-hear moment.

Mike says something about disruption to air flights due to fog. I can see that. Grandad’s still reading his paper, he’s on the sport pages now. He says it’s ridiculous that Saints have just played league games two days in a row. I agree.

I resolve to talk my Mum into buying me a copy of The Story Of The Blues (Part 1) when we go shopping next week, and so she does. Gratifyingly, the purchase helps to send it to number 3.